okay so its been a while between posts on barrybadger for me and things have been interesting to say the least. unfortunately hand foot and mouth disease has been making the rounds and decided to spend a while at our place. I thought little boss had managed to dodge it but on day seven of the two to seven day period for symptoms to make themselves known she got the tell tale blisters in her throat and that started a four day stint of her sleeping for only 30-40 minutes at a time. poor love she looked terrible and I am surprised my neighbors didn’t call in child services after one particularly bad night….I called in my mum who fortunately only lives around the corner and is not precious about cruising the streets in her pj’s and having her here meant I was able to sleep for a couple of hours. what a terrible virus it is. apparently it is more the discomfort of swallowing with throat blisters and not much else that babies have to deal with….the real horror of HFMD is reserved for adults unlucky enough to have a compromised immune system – which unfortunately was me due to the earlier rota-virus I had endured.  so once little boss was back to her usual cheeky self it was my turn to blister up. and did i give it a fair crack or what. when the doctors – yes there were two – are talking about you like you are not in the room and asking each other questions like “have you ever seen anything like this” and the response is “not in my 30 years of practice” its pretty hard not to scream at them “give me some fucking pain relief” yes I was tempted to swear but I had self medicated to a near catatonic state and having them discuss me like I wasn’t even there was probably more due to me not actually feeling present in my own skin. I didn’t really want to be in my own skin at that point cause it was burning, itching and incredibly painful all at the same time. it was about 11 degrees outside and I was sitting in the doctors wearing shorts a singlet and thongs – flip flops not g-strings – and covered in purple blisters….hardly surprising that they didn’t leave me in the waiting room for long. so I had to put old barry on the back-burner for a while…at least until I could move my hands and the new skin became less sensitive to allow me to type. lets hope it’s all over now and once the scars clear up I will have no reminder of it. I have included some pictures to give you an idea – they don’t    really do it justice but at least I can share it with you….sharing is caring right??? 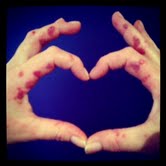 let me know what you really think... Cancel reply

Working two jobs - both full time. One I am remunerated for with cash, the other I am rewarded for by the frequent words of "I love you mama" and "can you play Roblox with me" View all posts by Mika